Index How to (Training) ...Getting started

When you receive your GPS tracker, keep the packaging for a short time in case it's needed again.

Charge it using the charger and USB lead or charging mat (Bond Tracker) supplied.  When charging (~1 hour per 1000mAh of battery capacity, from flat) the red Power LED will flash every 2 secs until fully charged, whereupon it will then flash green.  Please take a little time to familarise yourself with the tracker's features, especially the difference between the On/Off Power button, which is on the tracker's bottom edge, and the Panic button, which is the circular button on the front. Bond or boxed-in trackers are enclosed and so their LEDs are not visible. 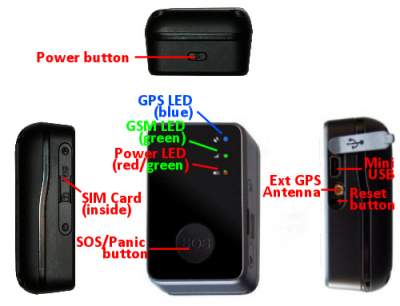 Powering on and off

The Power button is recessed on the bottom edge. The large oval (Prime1) or round (Prime2) button in the device's centre is a Function button normally configured as an SOS or Panic button. It is NOT the On/Off button. Press the Power button while watching the LED lights, for about 3 seconds, then release it after the second flash of the green LED. The Power LED will flash green briefly then stop, after which the middle green (the modem) LED will start flashing every 4 secs to show that it and the SIM is working. If the tracker is placed near toa window, or put outdoors, the blue GPS LED will flash as it attempts to receive the signal from the GPS satellites. Within 2 mins the tracker's status on the panel should change from Device Off to Device On, then to Sleeping if it does not move for 90 secs.

To turn the tracker off, press and hold in the Power button until it flashs red twice, then release and let it boot down and report to the database that it is shutting down.  In the User interfaces its status will change from "Sleeping" or "Device On" to "Device Off".  When finished, all LEDs will be off.  When powering it on or off, try to do so and hold it so that the device's LEDs are visible, to confirm proper operation.

Our GPS trackers can operate with much lower GPRS signal levels than a mobile phone.  When connected, the GSM LED will flash slowly (every 5 secs approx).  The GPS LED (blue) will flash relatively rarely, only when making connection with the GPS satellites.  The first GPS connection takes much longer than subsequent connections, and is best done with as few obstructions as possible between it and clear sky.  The tracker needs to pick up a very weak radio signals from GPS satellites far overhead. The device cannot be surrounded on all sides by metal. The tracker's two antennae are on the front of the tracker, which is the side that needs to face the outside world (sky, road, windows, etc).

If the tracker is connected to an external power supply, it will automatically switch on when power becomes available or when the ignition is switched on.  The process of turning the tracker on and off does not use a SMS or position credit, but it will send a few positions to determine whether it is moving or not.

To send an immediate distress SMS message, press and hold the Function/SoS button for about 3-4 seconds.  Holding it longer than this may cause more than one SMS message.  The (mobile) phone number (or up to 3 numbers or email addresses) that are to receive the distress message must first be set in the Contacts Settings section of the user interfaces.  These people should be notified about the possibility of alert messages and what they should do if they get one.
See: How To "...use the Tracking Panel" s

The current user interfaces are for a) Large Screen for desk computers or laptops; or b) Small screen devices like phones or tablets, which no longer require any pre-installed software.