Index How to (Training) ...Motion alerts

Our trackers contain a 3-axis accellerometer which can detect motion, even very slight motion, to toggles its status between "Sleeping" and "Device on".  When "sleeping" it sends position reports every 4 hours, so-called heartbeat reports. If it moves the GPS signal strength indicator becomes active again and the device's status indicator changes from red to green.  The purpose of this is to save the battery and not waste position reports.

The motion sensitivity needs to be "Armed" to be turned on. Contact details (mobile phone number or email address) also need to be defined in the Contacts Settings section and at least one contact needs to have theiir "Motion alert" option checkbox checked. See the App training notes on how to do this. By default motion sensing is Off, or Disarmed. To detect inappropriate motion, such as when being stolen, the tracker should be suitably at rest and in a location that's suitable for satelite signal reception, free from spurious motion, vibration, wind deflection, etc. before being armed. Each SMS alert will use one SMS credit per recipient. Email alerts have no cost but can take longer to be delivered. 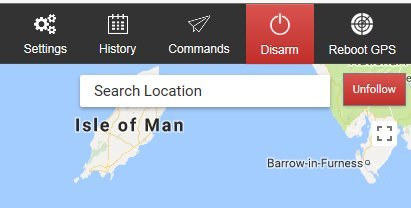 When armed, the "Arm" button is replaced by a "Disarm" button. The Commands menu toggles between Arm and Disarm also.  Arming and disarming the Motion alert capability doesn't use an SMS or a Position credit.

In the main TrackServer interface, motion alerts cause an audible alert and a display box appears when logged in to the trackers account, and remains top right until acknowledged by pressing the ACK button. The whole idea of motion alerts suggests that they be investigated to discover cause. The audio can be suppressed by pressing the "Turn Sound Off" button in the bottom right corner. 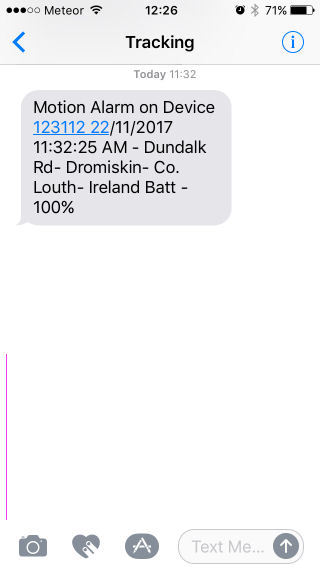 After each motion alert, the motion sensor is disarmed, and needs to be manually re-armed to become motion sensitive again, unless Auto-Arm is on, in which case the device will become re-armed after its next position report.

If you want this arming and disarming to happen automatically at particular times of each day, e.g. when your car should be static for particular hours, there is an Auto Arm function in the Settings section.  Pressing this button produces a dialog box with an Enabled checkbox, which if checked, enables the Start and End time setting boxes for each day of the week. 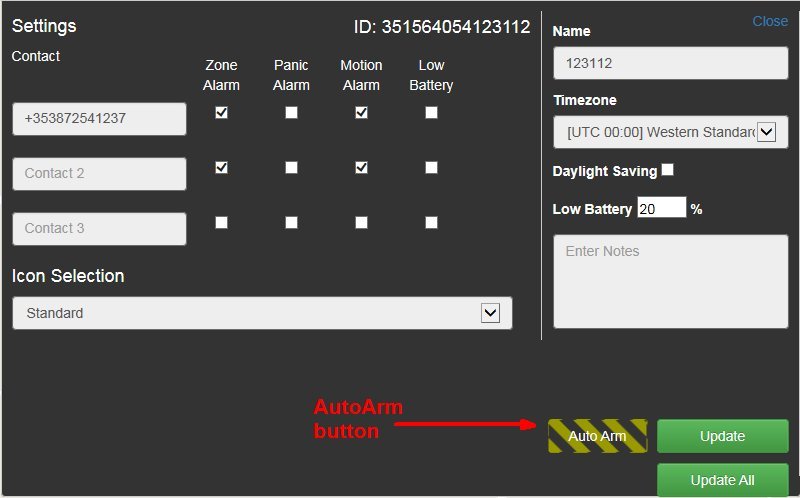 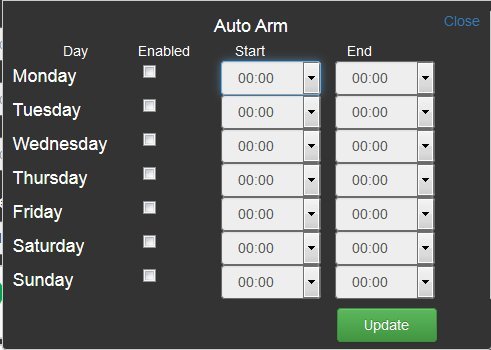 Pressing Update and closing the AutoArm dialog will enable the Auto Arm function but there's a delay in it taking effect until the device comes out of "Sleeping" status if sleeping, so move the device slightly to bring forward when this happen.  As soon as the "Device On" status appears the green Armed button (see above) becomes the red "Disarm" button.  From this point on, the device will send an alert, if there's movement between the two times set, and not outside them.
To turn if off, first press the "Disarm" button, then open the Settings button, press the Auto Arm button and uncheck the Enabled boxes, then Update and close. There might be a delay here also if the device is sleeping, so move the device to take effect immediately.